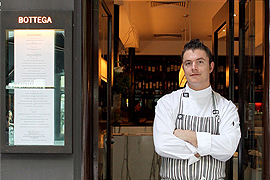 Gabriele Olivieri, Head Chef at Bottega in Melbourne, was raised on the Adriatic coast of Cattolica, in the Provence of Rimini, Italy. From a young age he was influenced by his Uncle Aldo, who taught Olivieri to love and respect fresh ingredients. Every weekend they would head to Aldo’s country house in the central north of Italy where together, uncle and nephew would gather everything they needed from the local markets to cook for the whole family. By the age of 10 cooking was set in Olivieri’s mind – he wanted to formally learn to create the food that gave him so much pleasure.

At 15 years of age, he found work as a commis chef in Cattolica, learning as much as he could from the chefs de parties. For the next few years, while in the process of gaining formal training at Institute Savioli in Riccione, he travelled between the Institute’s sister school in Montreal, Canada and his native Cattolica. While learning traditional French techniques in Montreal, Olivieri developed a taste for travel.

After finishing his formal schooling, Oliveri took a role in his beachside hometown at the Carducci Hotel as a Chef de Partie. It was here he found himself quickly working up the ranks to the role of Sous Chef (pasta section) – a position he held for a little over a year.

Olivieri still wanted to travel and when he was offered a position in Toronto, Canada – he jumped at the chance. At the ‘Romagna Mia’ he took his role as Sous Chef very seriously, bringing to Canada his native Italian training. By the age of 24 Olivieri wanted nothing more than to experience the prestige of a Michelin starred restaurant, so he headed for Florence, Italy, securing a position as Sous Chef at the restaurant of the five star Relais Santa Croce Hotel. Here, while following the ethos of the restaurant’s passion for Tuscan cuisine and genuine aromas and flavours, Olivieri began to make a name for himself.

His dream of working in a Michelin kitchen became a reality when he was offered a chef de partie role by Chef Vincenzo Camerucci at his Cesenatico restaurant ‘Lido-Lido’. Olivieri worked hard, creating traditional handmade pasta dishes with fresh, local ingredients – food he has great passion for. Camerucci was a huge influence on Olivieri – not only did Camerucci insist that he produce amazing food but he taught the young chef that those who succeed are always very hands on.

From Cesenatico to Milan, Olivieri secured a position with Chef Andrea Berton at his 2 Michelin starred ‘Trussardi Alla Scala’. Here Olivieri immersed himself in Berton’s distinctive, straightforward cuisine learning much about the importance of balance and recognisable flavours.

Again Olivieri’s desire to travel took him to London. There he met Australian David Thomas who offered him a position in his Michelin starred restaurant ‘Nahm’. This was a fresh challenge for Olivieri, creating traditional Thai food. In the pursuit of more foreign culture, in December 2008, Olivieri made the decision to journey to Australia. Here he was first employed as a Senior Chef de Partie at Teague Ezard’s ‘Ezard’. After a year working under the guidance of Dylan Roberts he mastered modern Australian Cuisine. Olivieri then moved to ‘Cecconi’s Cantina’ to work alongside Daniel Schelbert. At Cecconi’s, as the Senior Chef de Partie of the kitchen’s pasta section - Olivieri’s love of handmade pasta shone through and he thrived.

In June 2010 when the Sous Chef position became available at Bottega, it was an easy step forward for the young Italian. Here he brought to the kitchen his traditional technique and knowledge of traditional Italian dishes. In September 2011 when the current Head Chef Joseph Vitali decided to take a break from cooking, the natural choice for Head Chef was Olivieri. Outside of his passion for traditional Italian food, 30-year-old Olivieri enjoys spending time with his new Australian friends and playing ‘football’ – although, according to Olivieri ‘not Aussie Rules – the ‘real’ football!’